When circumstances require fast action and a thoroughly professional response, Aquatech is ready to jump into action and work with the local authorities and stakeholders. Faced with the prospect that a subcontractor had possibly damaged the only effluent pipe from the City of Barrie Water Pollution Control Centre (WPCC), a construction company looked to Aquatech for an immediate response.

The Aquatech design team mobilized to the site to design an emergency bypass system. In assessing the severity of the situation, a dewatering system was immediately installed under the existing Permit To Take Water (PTTW), to allow for excavation in the area of the damaged pipe.

Determining that the pipe had been compromised, the next stage involved installing an immediate bypass system. We worked with all municipal stakeholders in preparing the area for a pumping system which included the opening of concrete chambers in order to install the pump suction lines. Aquatech then had to secure further clearances with local officials for installing the system, as the discharge of the treated effluent had to cross a stream and was directed into Lake Simcoe not far from Barrie’s main public beach. This system could pump 43,000 USGPM in conditions of -25°C temperatures in order to facilitate the pipe replacement. In successfully accomplishing all these goals under tight timelines, Aquatech also managed the coordination of sewer plug installation and removals with a dive team. 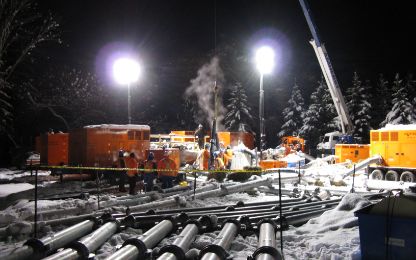 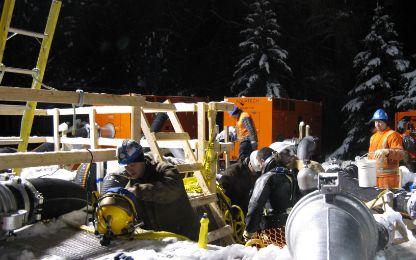 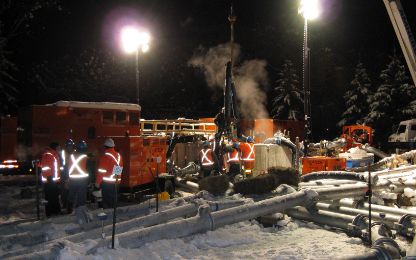